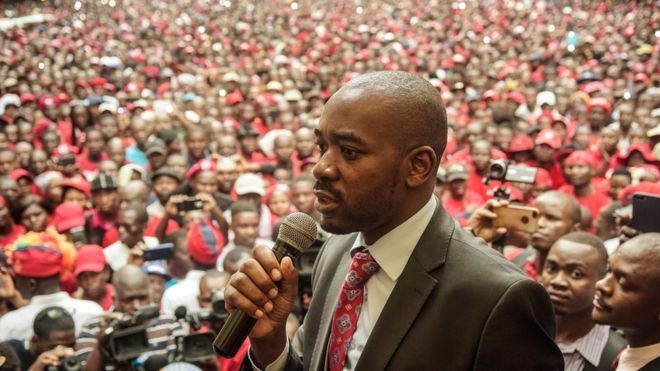 Zimbabwe’s opposition leader, Nelson Chamisa, has described the result of the presidential election as fraudulent and illegitimate at an extraordinary press conference that was delayed when riot police dispersed waiting journalists.

Chamisa, the leader of the Movement for Democratic Change (MDC), claimed his supporters had been subjected to violence and harassment and that the results of the election – the first since the army removed 94-year-old Robert Mugabe from office in November – had been manipulated.

It was his first public appearance since the incumbent president, Emmerson Mnangagwa, was declared the election winner early on Friday morning.

Zimbabwe was united. This election has divided us again

“Mr Mnangagwa did not win the election in this country … we won this election emphatically,” Chamisa said. “If you go around the country you will find no celebration. This is a black day for democracy. We are seeing a repeat of the last regime.”

Mnangagwa, who for decades was one of Mugabe’s closest collaborators, later invited media to his colonial-era official residence in Harare. The 75-year-old former spy chief said the elections had been free and fair and he reached out to Chamisa, saying he had a crucial role to play in Zimbabwe’s present and future.

“There will be some who are disappointed by the outcome [of the election] but I urge everyone to remember that we are all brothers and sisters, sharing one dream and one destiny,” Mnangagwa said.

The Zimbabwean capital was calm on Friday, with traffic and business almost returned to normal. The army, a visible presence this week, had withdrawn by 7am local time. A police presence remained, with two vehicles equipped with water cannon and an armoured vehicle full of riot police stationed outside the MDC headquarters.

Most MDC supporters appeared resigned to the result and unwilling to take to the streets to protest. “We are just accepting whatever is there for the sake of peace, for the sake of business and calm,” said Shepherd Warikandwe, 38, a chef. “Life goes on. I wouldn’t support a protest. Check what happened this week when people tried it.”

Chamisa, a former lawyer and pastor, spoke shortly after riot police briefly broke up a gathering of international and local journalists in the gardens of the Bronte hotel in central Harare. About 30 riot police, backed up by a truck with a water cannon, arrived at the hotel and ordered people to disperse.

About half an hour later the information minister, SK Moyo, arrived and told journalists to return to the press conference, which he said was going ahead. Chamisa, 40, then appeared and gave his speech.

“We are not accepting fake results … we will pursue all means necessary legal and constitutional to protect the people’s vote,” Chamisa said.

But the precise strategy the party will pursue is unclear and there is a risk that large-scale protests could invite further repression. On Wednesday six people were shot dead after the army opened fire on protesters, and on Thursday 18 MDC officials and supporters were detained during a police search of the party’s headquarters.

The MDC is likely to challenge the election result through the courts but even senior party officials admit this has previously been an expensive waste of time.

Another option is to try to draw in overseas powers. Though China unequivocally endorsed the poll result on Friday, South Africa was more circumspect.

Chamisa called on the international community to help Zimbabwe move away from the past and the “closed manacles of this dictatorship”.

Mnangagwa apologised to the media for the police’s press conference raid. The president-elect also announced an inquiry into Wednesday’s bloodshed.

Asked whether all members of the ruling party and security agencies shared his vision of democracy, Mnangagwa admitted divergences. “When you have a vision you don’t expect that everyone will come on board,” he said.

Many analysts have seen evidence of splits at the top of the ruling party in recent days. Stephen Chan, a professor of world politics at the University of London and an expert on Zimbabwe, was staying in the Bronte hotel on Friday and watched the police operation. “The government is clearly divided and one half has a stormtrooper mentality,” he said. “This kind of action is so clumsy it beggars belief.”

Officials from the Zimbabwe Electoral Commission announced early on Friday that Mnangagwa had received 2.46m votes, or 50.8% of the 4.8m cast. Chamis won 2.14m votes, or 44.3%, the ZEC said. Mnangagwa needed to win by more than 50% to avoid a runoff vote.

On Wednesday Zimbabwean authorities invoked a strict security act that allows them to ban public gatherings, after the military broke up opposition protests in Harare.

Friday’s images will reinforce fears that Mnangagwa’s victory heralds further repression in the impoverished former British colony, and that hopes of reform after the ousting of Mugabe in November were misplaced.