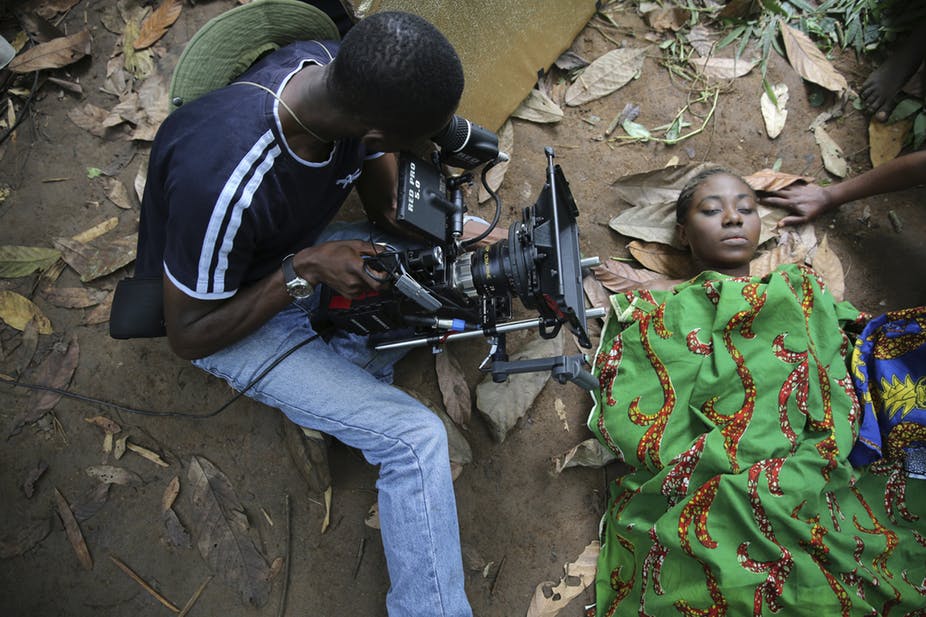 The video-film industry of Nigeria has been described as one of the greatest explosions of popular culture that Africa has ever seen. It is the first economically self-sustainable film industry in Africa.

Initially through the use of video technology, and now affordable digital technology, Nigeria produces more than 2000 films per year. The industry, popularly called Nollywood, is currently ranked as the second-largest in the world in terms of output after India’s Bollywood.

Nollywood’s popularity has spread across the African continent, to the African diaspora in Europe, North America and Australia. It has even gone as far as the Caribbean and Pacific Islands.

Born out of adversity

The first seeds for the emergence of the industry were planted in the late 1980s. Nigeria was experiencing difficulties as a result of political unrest and measures imposed by the International Monetary Fund and World Bank.

This economic climate made film-making on celluloid prohibitively expensive, and created a fertile ground for other, more affordable methods to develop. Nigerian businessman Kenneth Nnebue is generally credited with producing the first major Nollywood film, Living in Bondage (1992).

The film follows the tale of a man who joins a secret cult and murders his wife in a ritual sacrifice to gain wealth. It is set within the thematic and stylistic characteristics of superstition, witchcraft, religion, the quest for upward mobility and melodrama in Lagos’s urban landscape.

It explores corruption, love triangles and domestic disputes – all themes that have since been replicated in many Nollywood narratives.

From VHS to digital

Since the VHS industry of the 1990s, Nollywood has embraced digital technology. The industry captures the entrepreneurial spirit of Nigeria through the use of affordable and accessible technology. These are small-scale digital cameras, desktop editing software, and distribution primarily on DVD and video compact disc. These sell for around $2 per copy in Nigeria, and are watched at home, on street corners, in cineclubs or in video parlours.

While the term Nollywood is generally used to refer to the entire industry, it is important to note that it is not unified. There is a great deal of diversity and many different variations. Different genres exist, including horror, melodrama, comedy and action, as well as language divisions. It also includes films in English, Yoruba, Igbo and Hausa.

Despite its enormous output, financing remains low, with the average budget for a Nollywood film being around $20,000 to $75,000. The industry is often criticised for low production values. It is characterised by rapid turnaround times, the lack of script development, bad lighting and sound, low-budget special effects and amateur editing.

Directors are mostly self-taught, and are often less important and lower down the Nollywood food chain than stars, producers and distributors. Distributors often act as producers.

Despite all of this, the popularity of Nollywood demands film aficionados, scholars, festivals and cinema programmers take it seriously. A growing body of Nollywood scholarship has emerged over the past 15 years.

From budget to blockbuster

A number of Nollywood directors have started to make higher quality films. These are sometimes referred to as “New Nollywood”, New Nigerian Cinema, or the New Wave. These films are seen more widely than standard Nollywood fare and are accessible to non-African audiences. New Nollywood includes the work of directors such as Kunle Afolayan, Obi Emelonye, Jeta Amata, Stephanie Okereke and Mahmood Ali-Balogun.

The budgets for these films have also increased considerably, ranging from $250,000 to $750,000. The production cycles are also much longer. The New Nollywood films should therefore be recognised as very different from the low-budget video format films.

Red-carpet premieres attracting huge audiences now take place regularly across the world from Nigeria to other African cities and urban centres with a big African diaspora. Film festivals internationally have also picked up on its huge popularity. Special programmes with a Nollywood focus have taken place in Paris, London and New York, among others.

Nollywood can also be watched on pay-TV networks and free-to-air broadcasters across the continent and beyond. South Africa’s M-Net, which broadcasts across Africa, has channels dedicated to Nollywood. Intrepid distributors, mostly from the African diaspora, have created video-on-demand platforms for Nollywood. One example is the huge iROKOv. This has increased accessibility to African diaspora audiences.

Even Netflix has acquired a number of Nigerian films, indicative of the platform’s realisation of Nollywood’s popularity and commercial potential across the world.

The appeal of homegrown stories and characters

But it is in Africa that Nollywood has had the greatest impact. For African audiences who have for decades been fed imported films, the development of a local, homegrown film industry is hugely significant and important.

Nollywood’s popularity has spread across the continent and Nollywood films are watched all over Africa, from Kenya and Tanzania to Cameroon, Guinea and Togo. They are sometimes dubbed or translated through live interpretation at public screenings.

The model has also been exported and adapted across the continent. Video-film industries have been emerging in many countries, including Riverwood in Kenya, Ugawood in Uganda and Bongowood in Tanzania. There are also similar industries in the Democratic Republic of the Congo, Cameroon, Ethiopia, Eritrea, Zambia, South Africa and Zimbabwe.

The most obvious explanation is that the films display familiar and recognisable cultural beliefs, lifestyles, traditions, societal and sociocultural structures, histories, settings and locations. Their themes and narratives tap into the fears, dreams and aspirations of audiences.

Nollywood seems set to expand, grow and diversify along with audience tastes, viewing habits and the industry’s technological advancements. This is evident in the hugely popular Tanzanian video-film industry, Bongowood. Tanzanian audiences initially watched imported Nollywood films, but from the early 2000s aspiring local filmmakers started to produce their own video-films. The popularity of local Bongo films now outweighs Nollywood films in the country.