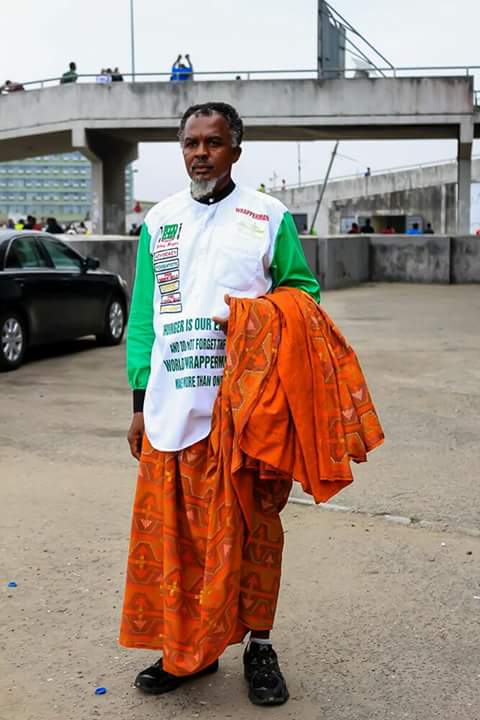 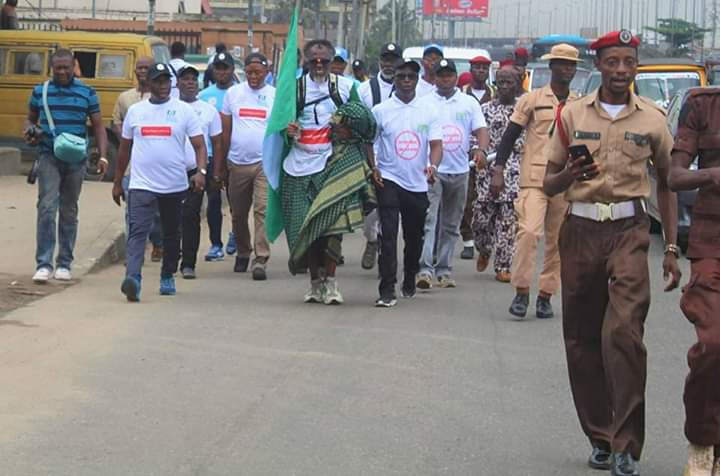 Ambassador Adjarho David Obaro is a marathoner, but he does his for charity while wearing wrapper. He is also a photographer and chef. To date, he has made the Guinness Book of Records as an artist who has worn the longest wrapper. He spoke to Edozie Udeze on this and more

David Obaro is a photographer, culture activist and a chef. Even though he started photography as a hobby, he has today taken it to greater heights. Beyond that, he has also been involved in long distance races all over the world wearing long wrappers.

This has made him to be widely known as World wrapper man. At international meets and in some cases locally Obaro wears different long wrappers tied to his waist to make his point and equally attract attention to himself.

So as Obaro combines his professional chef work with photography and culture activism, he has come to be known as an artist specially sought after by the high and might in the society.

“Oh, yes”, he began in an interview, “the wrapper concept started in the 1980s when I went to represent my dad at the University of Benin.

It was an Urhobo day event. After that event I then discovered that most Urhobo men there dressed in our traditional wrapper attire. I now fell in love with it and then began to dress like that. And then I came across Festus Okotie-Ebo’s story; he wore bright, long and exceptional and colourful wrappers all his life.

I told some of my friends that one day I will beat this record; I will have one of the longest if not the longest wrappers in the world tied to my waist. They thought I was joking”.

So, in the year 2003, the opportunity came for Obaro. That year he was duly registered by the Guinness World Records as someone who tied the longest wrapper on earth. He explained it clearly.

“It was 38 yards long. Yes it was. That 38 yards was to represent every state in Nigeria. So I named it the unity wrapper. It was glorious, eye-catching and highly artistic. After tying it and I let the Guinness Book of Records be aware of it.

They acknowledged it but yet sent me a letter saying; that they have a right to publish or not to publish in the world records. This made me to look at the whole situation from one angle.

To me, I thought maybe they do not value my own culture; the Urhobo culture. Then I said I needed to preserve this and begin on time to publicize it.

This led me into this marathon crusade wearing different wrappers at different world meets. But purposely to do them for charity, to help the less-privileged in the society. So I started participating and running in races all over the world.

These are mainly long-distance marathon races”. Yet after sometime, Obaro told himself to go into serious cultural displays of his wrappers. It was just to establish the point that he was not joking about this crusade; his new found love and conviction. “People said to me: ‘this is not possible’.

I said to them, there’s nothing that is impossible. I will start it, I told them. And lo and behold I started. But they did not allow me in Nigeria when I first began. Then I found my way out of the country to Europe. In fact in 2009, I tried to run at the first marathon I participated in. They would not also allow me. In 2010 at the Bucharest international marathon, they also tried to deny me the opportunity to run with my wrapper.

So I ended up doing the race in wrapper. Ever since, both locally and internationally, I’ve been doing my marathon races in wrappers”.

Now happy and fulfilled, Obaro went far afield to chop for more classical wrappers to help him look gorgeous, and outstanding at every meet. “Yes I run with wrapper, they now allow me. And I feel excited about it, for this is part of promoting my own culture in the best way I can.

The Bucharest show in Romania is one of the best I’ve had. It opened the first window of opportunities for me. To me, it speaks a lot about running with a lot of problems and overcoming them. Running with wrapper is not easy and it can never be.

But I indulge in it all the same. For the first time it was tough, very tough running with a 20 yards wrapper, weighing 40 kg. My wrapper is a 40 kg weight and here I was trying to do a long distance race with an extra heavy load, whereas others do it with less load. That was my first dilemma but it was a mission I had set out to accomplish”.

Then he told those who wanted to discourage him that no matter what you go through, life itself is full of problems.

“But you can always overcome these hurdles if you persist. And in marathon races the lessons I have learnt is that you are sure you’ll end it. No matter how long the distance is and how long it takes you to finish the race, please finish the race. You do that with that Olympic spirit that I must finish my race. I don’t care about your speed. Everyone has his or her own speed.

And so I run at my own speed with the wrapper and all. I never bothered. My own is that I must run my race and I must finish no matter the time I brace the tape”.

And so, so far so good. It has been quite thrilling for Obaro not only that he gets the desired attention, he equally uses it to open new vistas of hope for those who benefit from the money he raises from his efforts. He also highlighted the difficulty he usually encounters while on the road with others. “No, I do not really get people who accidentally or otherwise step on my wrappers. I run mostly as a charity runner.

So, I have my charity I run for to raise awareness for projects as an advocate of different NGOS. The idea is what I see abroad. And I say okay I can replicate it here in our own situation. So, when I come with my wrapper, people are amazed and they want to give me my space when I run, you see messages on my top reading – running for hunger, running for education or for other necessities. There are many NGOS I work with and so I carry their messages along. At times after running a race, I just release the wrapper for a show. It is all part of it”, he said, with a gesture of the hand.

He went on: “Abroad when you see some of my pictures, you see everybody screaming ‘where are you from? We have not seen this sort of demonstration before’. They then begin to share the stories. However, whenever I am running I boldly write, ‘proudly Nigerian”.

That also in most cases, helps some to identify me easily. I try also to ensure they raise the Nigerian flag in any arena where I am running. In 2015, I did the first long-distance race in Nigeria”, he announced with echoes of pride in his voice.

Thence he moved on in high spirits. He said further: “I have done for education running from Lagos to Delta State in twelve days.

I have done for Benue State flood victims from Lagos to Makurdi for 14 days. That was 900 kilometres. Presently I am doing one with an NGO here in Lagos building schools for the less-privileged people. They are currently building 600 room blocks and the school is for those who cannot afford to pay school fees on their own. The school will open this month of September.

I will run the streets of Lagos. At the moment I’ve begun and people usually say to me, ‘come to our area to do this for us.

I also go there, run, calculate miles and tell people ‘oh, this is why I am running. I am doing so to raise awareness for a school project here in Lagos. Usually people support by donating to the funds” Yet, Obaro does not need speed or the like to do the races. “I do not bother about that not even here in Lagos’, he reaffirmed, smiling.

He teaches people instructive lesson via his attitude to this. “In life everybody has his own attitude, his own speed in life. Do not copy any one’s speed. Do your own the way it suits you. Benin people say edegbe; it is when you wake up is your morning. That is it about life. So long as you are ready to go the extra mile, hold on to it.

You will certainly get to your destination. The money comes mostly through the awareness on social media. This has really helped me a lot. And I thank God for that. Most of the people who support the projects I do, I do not know them. Mine is to draw attention to the project and they donate directly to it.

It is usually directly to the NGOs at that point in time. I tell people I am expensive. Any time I put my legs on the ground each person pays one dollar. So, this is how it goes and how the donations come in”.

Now, how do you combine this with photography? “Ah, now another opportunity it has given me is to see things people can’t see easily, especially when I am doing my long-distance I capture scenes. I see a lot of things. Lagos to Delta I have a lot of pictures; so also Lagos to Makurdi.

These pictures are exclusive. In fact, I create time for this. I tell people anything you really want to do in life, please create time for it. Be fulfilled. I feel fulfilled when I do this. There is one NGO in Lagos I also with. Theirs is to feed the people; the poor masses”.

He has thus far only showcased his works on social media. “But I am planning to do an exhibition”, he quickly assured. “I have a lot of content. I am planning to celebrate 50 years of my life. It will be the best moment to do so, to showcase my numerous photography works.

I do grilling in addition to this. Yes I grill; I am a professional chef. I started photography professionally in 1991 after I covered my uncle’s wedding. I have equally covered the Argungun festival once or twice. I am conceptualizing a project called, run, talk and eat at the moment. I run in the morning. In the afternoon, I go talk to students anywhere. Thereafter, I will grill for them, for people generally”.

Obaro is from Agbarha-Otor in Ughelli North local government area of Delta State, an Urhobo man who loves his culture to the fullest.

For him culture is life and life is culture. “They are interwoven”, he asserted and, “therefore we need to preserve and promote what is ours” he noted finally with a broader grin on his face.