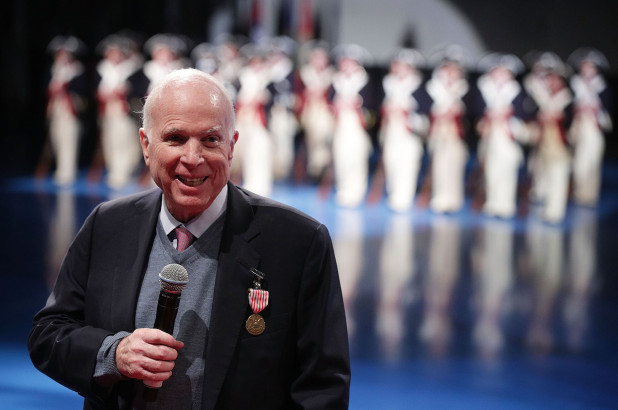 Sen. John McCain, who died Saturday of brain cancer, will be buried at the U.S. Naval Academy in Annapolis.
The former presidential candidate and prisoner of war graduated from the academy in 1958 and is one if its most distinguished alumni. Details about services were not immediately available. 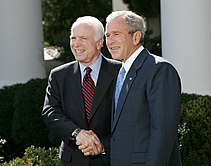 Bush and McCain
The Naval Academy said Saturday that it was mourning McCain’s death.
“His life of service to our country is a legacy that will continue to be revered,” the academy wrote on Twitter.

McCain has described his time at the Naval Academy as a “four-year course of insubordination and rebellion.” His father and grandfather, the Navy’s first father-and-son set of four-star admirals, also attended.
The 81-year-old had been suffering from brain cancer for over a year. In a September “60 Minutes” interview, he spoke of his desires for a burial ceremony in Annapolis.

“You just have to understand that it’s not that you’re leaving. It’s that you — that you stayed. I celebrate what a guy who stood fifth from the bottom of his class at the Naval Academy has been able to do,” he said. “I am so grateful. I — every night when I go to sleep, I am just filled with gratitude.”

Africa24hrs.com reports that Bush and Obama will eulogise the late Sen. John McCain