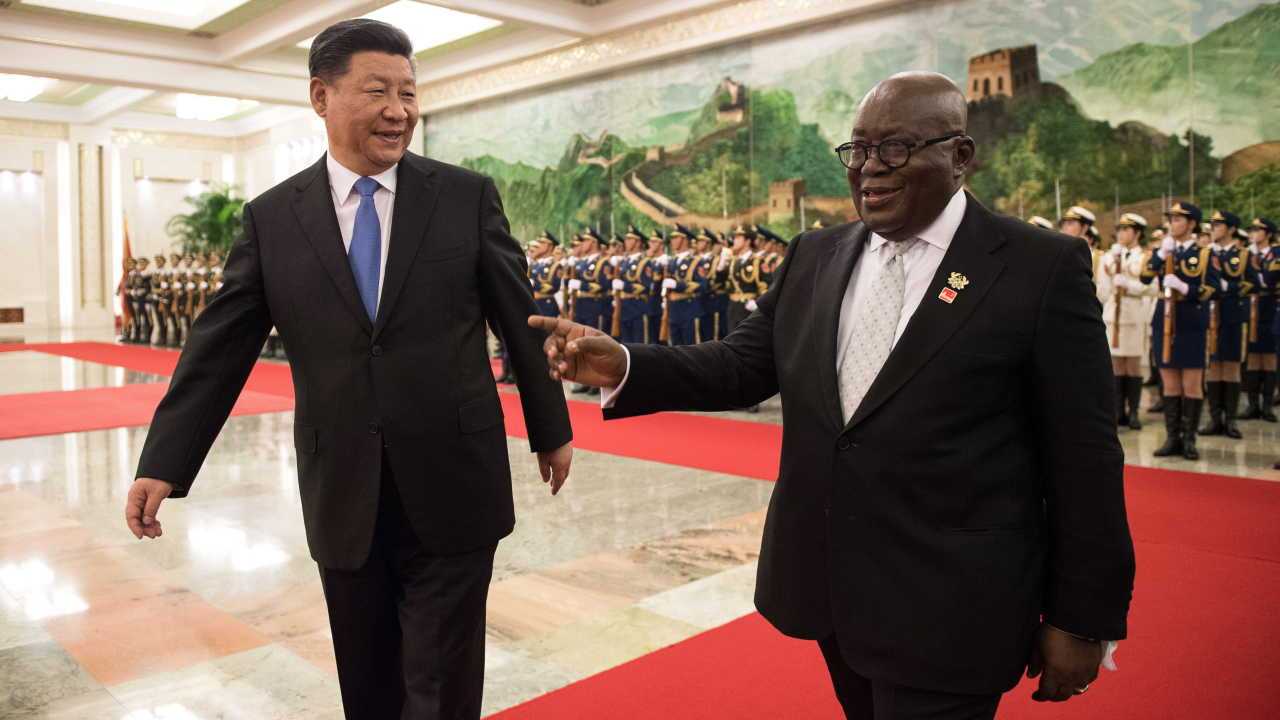 The President of the People’s Republic of China, Xi Jinping, said on Saturday in Beijing that he is ready to have a working relationship with President Nana Addo Dankwa Akufo-Addo to strengthen the relationship between the two countries.
According to Jinping, there has been a deep bond between China and Ghana for the past 58 years, and it was made possible by the first leader of Ghana, Kwame Nkrumah and Mao Zedong. That bond, he said, needs to be sustained.
Jinping said that he is very confident that under joint leadership, the two countries will take its operations to new heights.
Jinping is hopeful that the relationship will “enrich our friendship, take our bonds of cooperation to new heights, and, thereby, deliver greater benefits to our two peoples.”

To this end, the two Presidents witnessed the signing of eight agreements that define the ambit of Chinese cooperation with Ghana. Principal amongst them was the $2 billion Sino-Sure Framework Agreement, which will enable Sino-Hydro Corporation, a subsidiary of Power China, to finance and participate in major infrastructure, road and railway construction projects.

President Xi Jinping also said that China will provide a grant of 200 million Chinese yuan, the equivalent of $30 million to Ghana to assist in the effective implementation of the economic policies of President Akufo-Addo.

The project embarked on by the Chinese government to construct 1,000 boreholes across some parts of Ghana will also help to ensure access to water, he said.

The Chinese President also hinted that China will finance the construction of the Jamestown Fishing Port Complex, the expansion of the Cape Coast Sports Stadium, the commencement of the Phase 2 expansion project of the University of Health and Allied Sciences in Ho, and the construction of a new cocoa processing facility, in line with President Akufo-Addo’s vision of adding value to Ghana’s raw materials.

President Xi Jinping also announced that his government will provide a 50 million yuan ($7.3 million) grant in military assistance to aid in the construction of the headquarters of Ghana’s Armed Forces which will encompass the strengthening of Ghana’s capability to improve maritime security in the Gulf of Guinea, training of Ghanaian peacekeepers, strengthening the capacity of Ghana’s Police service and the establishment of a legal assistance and extradition treaty between China and Ghana.
“Such co-operation will inure to the benefit of our two countries. We will support your country in achieving its vision of Ghana Beyond Aid,” he added.

The President also pledged that his government will encourage Chinese firms to invest in Ghana and take advantage of flagship programs such as the 1-District-1-Factory program for planting, infrastructural development initiatives, particularly in the roads, railway and energy sectors, amongst others.

According to him, with Ghana being the African country with the highest number of students studying in China, his country will increase the number of scholarships to Ghana, and also advocate for the deepening of collaboration between media organizations, think tanks, and universities of the two countries.

The Chinese President, on the issue of illegal mining in Ghana, and the involvement of some Chinese nationals in the phenomenon, assured President Akufo-Addo that his government will “co-operate with Ghana and tackle the problem,” and indicated his full acceptance of the enforcement of Ghanaian law in the area of illegal mining.
In response, Akufo-Addo also assured his colleague of his government’s commitment to making sure that things work for the betterment of the two countries.

President Akufo Addo said the cooperation between the two countries is a good one, adding that he will make sure it is deepened and intensified for the benefit of all.
According to him, Ghana will continue to be a supporter of policies of China and make sure that the relationship between the two is strengthened.